July 2016 Employee of the Month

Please join us in extending a heartfelt congratulations to our July Employee of the Month – Keshu Kuchhadiya!

Keshu has been nominated for his hardwork and dedication to his job. “Keshu has put his heart and soul into his job.He wears his heart on his sleeve, if you were to cut him open he would bleed JC red” commends Keshu’s line manager. He adds “he leads his team from the front and doesn’t know how to give in.His knowledge of the assembly line is second to none andI am very proud I have Keshu as member of my team.”

Getting to know Keshu

Keshu is a Production Operative in ourAssembly Departmentand has been employed with JC Metalworks since 2009. Keshu, along with his team, are responsible for assembling and packing final products before despatch. At this stage of the manufacturing process, all units are inspected to a high quality standard.

Keshu and the rest of the team ensure that all jobs are assembled to individual customer requirements – correctly and on time. He is an important part of the JC Metalworks Team as he ensures the smooth-running of the assembly and packing line, taking initiatives to ensure the final product is something to be proud of.

Keshu reveals that his favourite aspect of his job is “organising and leading a team in order to achieve deadlines on time. Working as a part of a team is not only enjoyable but also all jobs are completed to the highest of standards.”

Keshu also tells us which three things he couldn’t live without; 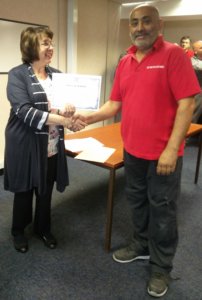 Congratulations on your award, Keshu! Keep up the good work!